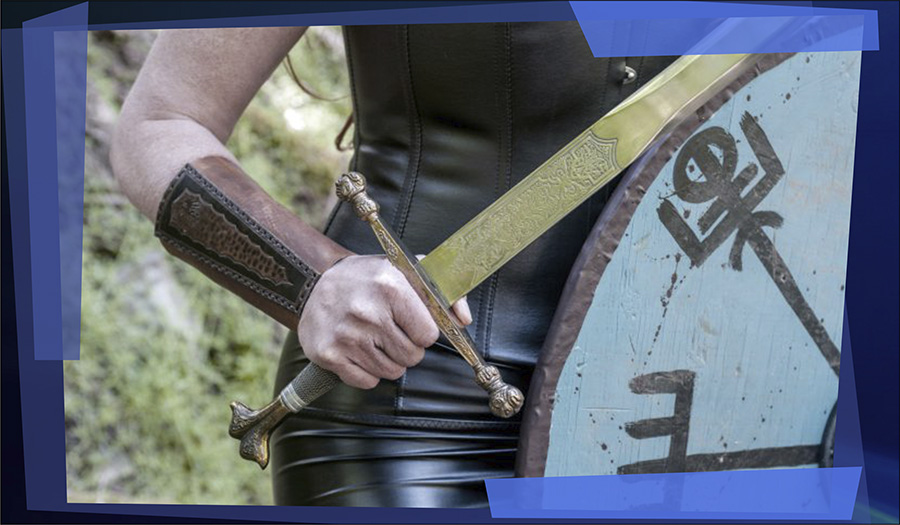 Gabriolan Melanie Teichroeb’s, Shield Maiden, has been staged in Austin, Texas and in the theatre district off-Broadway in New York City and is now part of the The Port Theatre’s Discovery Series.

The production is a 10th century version of a Ted Talk on life as a Viking woman warrior. It’s funny, sexy, fierce and unapologetic. Written and performed by Teichroeb, Shield Maiden shows the audience that they have more in common with medieval era warrior, Ingrid Larsdöttir, than they could imagine.

The solo show shines a light on contemporary issues like inequality and sexism using humour and vulnerability. “The #MeTooMovement sparked conversation and change around these issues,” Melanie explains. “People are still working tirelessly to challenge the status quo. The visual impact of a confident woman warrior on stage resonates with audiences. Ingrid is flawed, but very powerful and relatable.”

Despite the pandemic shutdown of live performances, Shield Maiden hit the stages across BC this summer stronger than ever. Melanie said, “This show is loads of fun to perform and to receive the positive feedback that the message is meaningful to women and men alike is such an honour.”

“Shield Maiden by Melanie Teichroeb is a fierce and funny mash-up of Vikings and a Tony Robbins workshop, and was truly one of the highlights this year of our 26th annual fringe festival, FronteraFest. Not only is it a great script, but Melanie’s performance was just incredible. It was no surprise that it was the best-selling long fringe show of the festival this year. Can’t wait to see what she comes up with next.” – Ken Webster, Artistic Director, Hyde Park Theatre Austin, Texas

TICKETS ON SALE  11am October 28th

Please note: This show is for mature audiences and contains language and subject matter that might be offensive to some.

Thanks to our  Sponsor