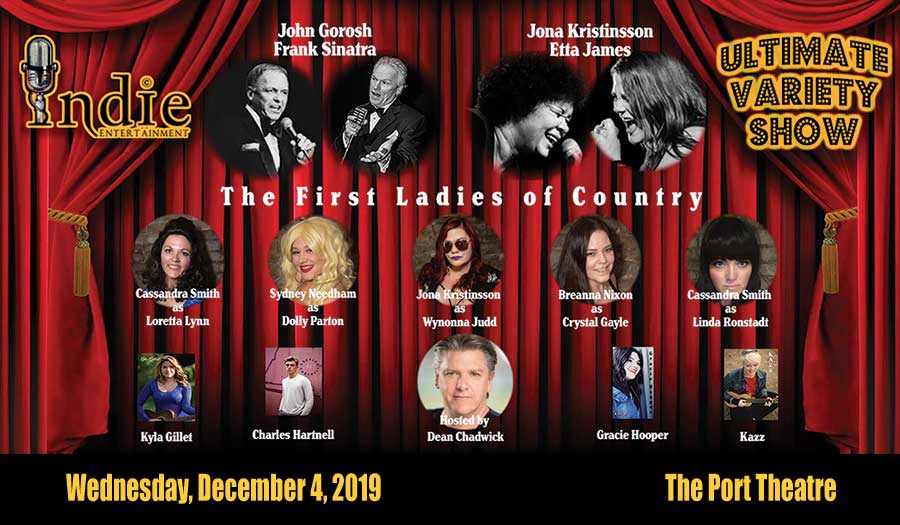 The Ultimate Showcase of Local Talent with many of your favorite Stars on one stage.

Come join us for an Awesome musical experience, a night filled with professional musicians paying tribute to their favorite artists. Featuring the Chairman of the board of crooners, The Queen of blues and soul, Country sweethearts and Indie Entertainments newest artists.

Blue Eyes & Me:
A Tribute to Frank Sinatra Featuring  John Gorosh and his 7 Piece Orchestra.
When a former  class mate told John that his band wanted him to cover a rock song at their 40th school reunion, he immediately said “NO Way, It’s been 40 years since I sang anything” But after a few weeks, he thought “If it’s that scary, I’ve got to do it!” That experience was so much fun, he decided that learning songs would be a good pastime and after a few years of practicing on his own for fun,  found a professional voice teacher, mentor and a friend in Jona Kristinsson,, Nanaimo’s premier vocal coach at West Coast Vocal Academy and owner of Indie Entertainment. At his first lesson, she asked ”who’s your favorite singers?” Ray Charles, James Brown, Tony Bennett, B.B.King, Howlin’Wolf and …Frank Sinatra. After a few songs, Jona realized the talent she was working with and  said “Lets go with the Chairman of the Board”.  And so the training started.
Here we are today armed with an amazing 6 piece band, of highly sought after musicians and one hell of a show. What keeps John going is the respect for the Music that Sinatra recorded: the clever lyrics, the arrangements of Nelson Riddle, and the fabulous sounds of the Count Basie Orchestra, the intriguing tones that make Sinatra’s voice so compelling. Some of the  songs are light-hearted love songs, but  favorites  are darker and deeper, where you can hear the years of life’s ups  and downs come through.

Miss Peaches & Me.  A tribute to the Queen of blues and soul: Etta James Featuring Jona Kristinsson
After singing many genres in her 30 year career, Jona found the blues and fell in Love. One lady stood out to her for versatility and incredible voice. Ms Etta James.  Jona identified with Etta for  her versatility as a singer, touching on blues, Jazz and Soul in her career. It was not unusual to see Etta at a Jazz festival and then  Blues festival the Next day. Jona’s music life has been a one big cross over as she plays with multiple artists and bands.

Charles Hartnell – Charles has been performing on stages around Nanaimo since an early age doing musical theatre, classical repertoire and now he is ecstatic to be making his jazz debut on the Port Theatre stage

Gracie Hooper – Gracie Hooper is a 17 year old singer from Nanaimo that has been singing as long as she can remember. She has been working with Jona Kristinsson at West coast Vocal academy for several months and has sang at The VIEX, Special Woodstock, The Queen’s and many more.
Kyla Gillett – Kyla Gillett was born and raised in Nanaimo. When she was a little girl, she dreamt of being on a big stage in front of a large crowd.
It’s safe to say that she has made that dream come true after having played many shows.

KAZZ – Kazz is a local singer and musician who started playing guitar and singing at open mic’s in her teens. Recently moving back to the island from Vancouver where she was exposed to a variety of genres, she’s excited to have found the west coast vocal academy and continue to hone her vocals.

Dean Chadwick: Host – Dean Chadwick is a cultural leader in Nanaimo with his work as Founder and Artistic Director of both Schmooze Productions and the Harbour City Theatre Alliance Society. Due to his efforts in advancing local, live theatre, Dean received the City of Nanaimo’s 2019 Honour In Culture Award. In tandem with directing, Dean is also a talented performer, and recently recognized by Theatre BC with the Best Supporting Actor Award. Upcoming projects include directing A Christmas Carol for Harbour City Theatre this Christmas, and Jesus Christ Superstar for Schmooze Productions in the Spring.