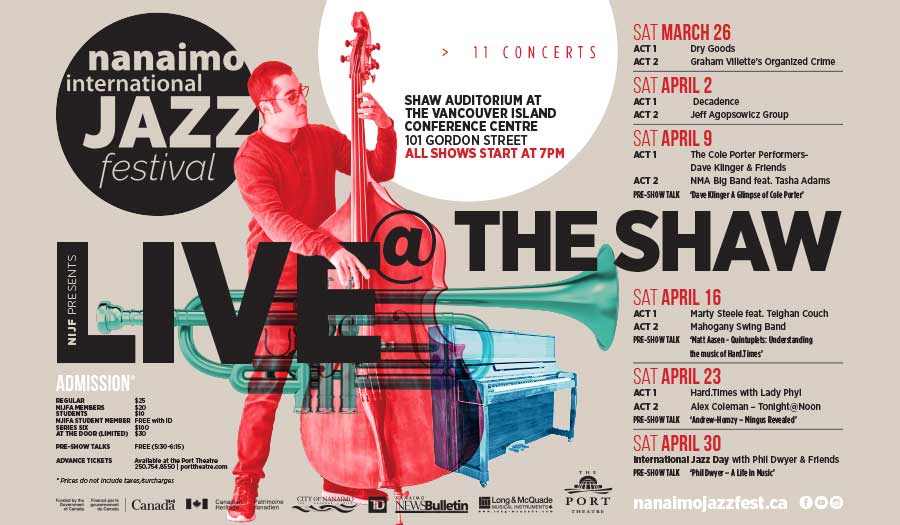 All shows start at 7pm at Shaw Auditorium of the Vancouver Island Conference Centre ; Entrance off 101 Gordon Street, Nanaimo

Act 2               Graham Villette’s Organized Crime
This group is excited to bring you music inspired by some of the greatest jazz organists in history such as Jimmy Smith, Larry Young, Melvin Rhyne, and Joey DeFrancesco. Featuring original compositions by Villette as well as jazz standards and compositions by jazz greats like Hank Mobley, Thelonious Monk, Larry Young, and more

Act 1                Decadence
Steve Jones’ Decadence is a 10-piece ensemble which featured a rotating cast of Nanaimo’s top music professionals and VIU alumni. Be it funky or swingy, Decadence is naughty when playing dances.

Act 2               Jeff Agopsowicz Group
Jeff has invited a broad line up of musicians, many familiar to local jazz lovers, to join him for the evening. Joining Jeff will be Rachel Cooper on reeds, Claudio Fantinato on saxophones, Kelly Thomas on piano, Steve Wallace on bass, and Wayne Finucan on drums.

Act 1               The Cole Porter Performers-Dave Klinger & Friends
Once upon a time, before the age of the ‘singer-songwriter’ there was a period of 40 years or so in the middle of the last century when writing music and lyrics was the domain of real professionals. And what songs! We are lucky to have inherited this huge catalog of well-remembered songs, which are known collectively as the Great American Songbook.   Parksville pianist Dave Klinger constantly found himself playing some of the numbers in this collection so, with his trio and vocalist Jeanie Paterson, he presented an afternoon of songs by one of the most prolific writers, Cole Porter, at the Mac in 2020. Encouraged by the reception of this concert, Dave, with associate (& drummer) Michael Wright, has researched the creations of other songwriters from the period.

Act 2               NMA Big Band – featuring Tasha Adams
The Nanaimo Musicians Association Big Band It’s our 55th year!  Since 1967, the NMA Big Band has promoted the performance of big band music through jazz concerts and fund raising dances in the Mid-Island area. During its half century, the band has given emerging talents their first step up to the professional scene and has awarded tens of thousands of dollars in music scholarships. Band members include local professionals and hobbyists, school band teachers, and VIU professors and students.

Act 2             Mahogany Swing Band
Mahogany Swing Band is a Vancouver-Island based jazz ensemble led by pianist Patrick Courtin and vocalist Simon Paterson. The two first met as historical interpreters working at Barkerville Historic Town while performing music of the gold rush era on a historic stage. The pair became fast friends and were particularly drawn together by their mutual love of classic jazz music – especially the Great American Songbook.

Act 1             Hard.Times with Lady Phyl
Hard.Times is Matt Aasen (guitar), Rob Elo (keyboards), Steven Taddei (bass), and Jesse McNeill (Drums); musicians with a serious passion for rhythm. With backgrounds in jazz, pop, ska, soul/RnB, and progressive metal, they seek to meld many of the aforementioned genres to create something that is truly unique.

The perfect way to celebrate International Jazz Day! As a saxophonist, composer, arranger, pianist, and educator, Canadian musician Phil Dwyer is recognized as a master of his craft. We are in for a musical treat!

These events are licensed, lobby bar opens at 6:30pm.  BCHA protocols will be respected.
Due to capacity regulations, ticket sales are only available via the Port Box Office