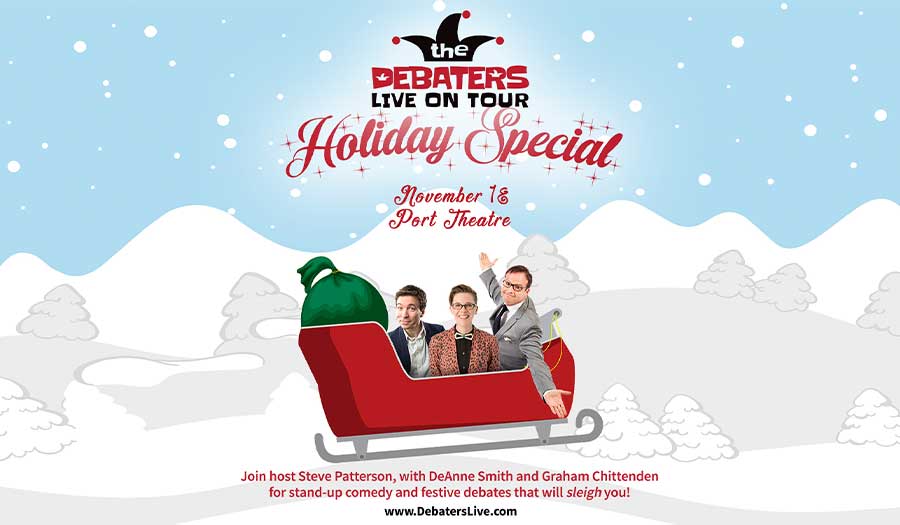 Following the success of their 2017/18 run, The Debaters Live on Tour return with a 2019 Holiday Special, kicking off in Nanaimo!

The Debaters Live on Tour is the comedy stage show where comics go toe to toe in a battle of laughs and logic and the audience picks the winner. Award-winning comedian and host, Steve Patterson brings two of Canada’s top headlining stand-up comics, DeAnne Smith and Graham Chittenden to venues across Canada to delight crowds with an exhilarating exchange of facts and funny.

But that’s not all. Before Steve launches into the debate portion, The Debaters Live on Tour gets the holiday hilarity rolling with razor-sharp stand-up comedy from all three of these world-class comics.

The Debaters Live on Tour Holiday Special features two debates in the format familiar to fans of the popular radio show The Debaters. Program creator and tour producer, Richard Side, is excited to present this extraordinary line-up that will deliver the festive fun and will leave audiences debating only one thing: which part of the evening made them laugh the hardest.

These all-new comedic clashes are for live audiences only and will not be recorded for broadcast. No two live shows are ever alike so get your tickets now for a once in a lifetime experience.

Due to the spontaneous nature of live performances, some language may be inappropriate for younger audience members. This is not a CBC production and will not be broadcast.