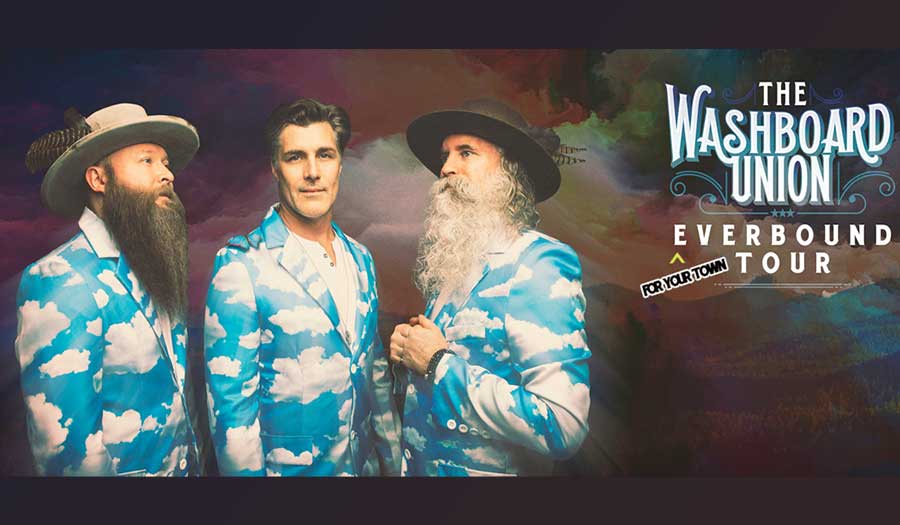 THE WASHBOARD UNION, three-time CCMA Group of the Year and five-time CCMA Roots Artist/ Album of the Year are among Canada’s preeminent country bands. Stepbrothers Aaron Grain and Chris Duncombe and best friend David John Roberts share a love for the art of songwriting and storytelling that has resonated with audiences from North America to Europe. On their latest album “Everbound” (April 2020), THE WASHBOARD UNION keeps the good times rolling with an irresistible blend of roof-raising anthems and poignant ballads, coupled with their impeccable three-part harmony and top-notch musicianship. This is a band that cares deeply about their fans, and anyone who has seen them live knows The Washboard Union engage with their audience at every opportunity.

THE WASHBOARD UNION has been Certified Gold twice in Canada for “Country Thunder” (2021) and “Shot of Glory” (2017). In addition, they have had seven Top 10 hits and numerous Top 20 hits. The band has the unique distinction of being the first country band to win the JUNO Award for Breakthrough Group of the Year. They are also a philanthropic force to be reckoned with, donating their music and merchandise to countless charitable events.  For more about THE WASHBOARD UNION please visit thewashboardunion.com

American Songwriter Magazine called RAQUEL COLE “A dynamite vocalist, songwriter and guitar slinger to boot!” Her skill as a musician is one of the first things the audience notices about this B.C. native. Singing has been her first love for as long as she can remember, acquiring her first guitar at the age of nine and writing songs soon after. Her first single, “Think About You” hit the airwaves in 2021, landing in the Top 40 with the video making her a Top 3 finalist in SiriusXM’s Top of the Country Competition. Cole has toured extensively the past few years, opening for artists Carrie Underwood, Jonny Lang, Brothers Osborne, Scotty McCreery and Josh Turner.

Cole’s fiery and soulful music has garnered significant recognition. in 2017 she was named by The CBC and Radio Canada as “25 under 25 musicians everyone needs to know,” alongside Alessia Cara and Shawn Mendes. She earned the CCMA Discovery Award (2015) and numerous accolades from American Songwriting Magazine. Additionally, her songwriting earned Cole her first Billboard Top 10 Country Album charting for a song recorded by superstar, Marie Osmond. For more about RAQUEL COLE please visit raquelcole.com