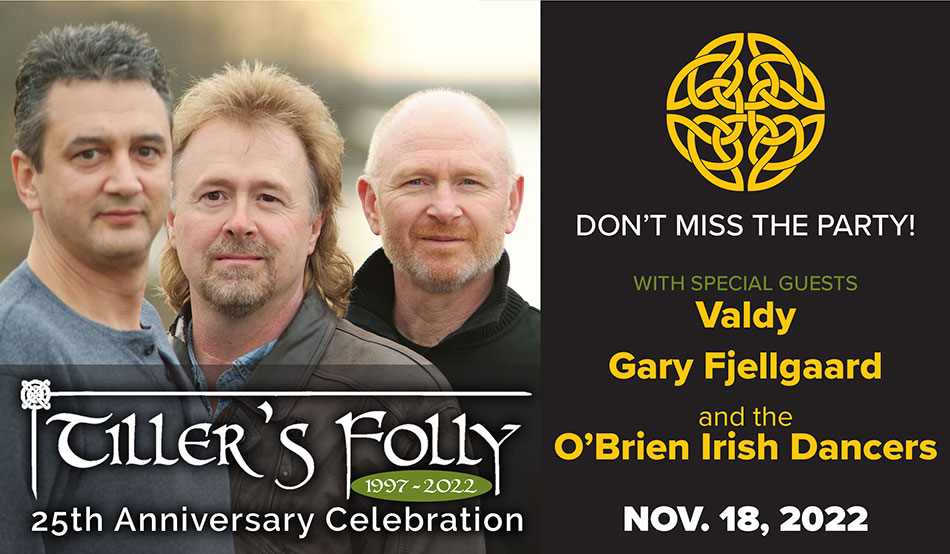 Don’t Miss the Party and a chance to hear your favourite Tiller’s Folly Songs as they celebrate their 25th Anniversary season with special friends and artists joining them on stage including: Valdy, Gary Fjellgaard & the O’Brien Irish Dancers.

This West Coast Celtic Roots band has been telling tales as old as time with a modern lyrical twist, and a penchant for stirring tales of intrigue and adventure, inspired by true life heroes and villains – backed by their potent mix of acoustic Celtic-influenced roots sound for the last 25 years. Across nine albums Tiller’s Folly has united communities across the globe with songs steeped in Scottish, Irish and Canadian west coast tradition. Their lively songs of happy wars, highwaymen and moonshiners, sad songs of love turned sour and the lonely immigrant’s sorrow, and whimsical sea shanties that compel audiences to tap their feet, clap their hands and sing along with gusto. Their global fanbase that has fallen in love with timeless hits like ‘Water at the Bar’, ‘Death & Taxes’ and ‘Ghosts of Read Island’, ‘Spanish Banks’ and ‘Steamboatin’ Jamiesons’ to name a few.

Indeed, the Tiller’s Folly live experience is where the talented quartet truly shine, having performed to thousands over the journey at major festivals throughout the US, Canada and the UK. Tiller’s Folly are Bruce Coughlan, Laurence Knight, Nolan Murray and Eric Reed.

VIP Tickets includes preferred seating and a meet & greet reception with the artists at The Port Theatre following the performance (NO Host Bar).