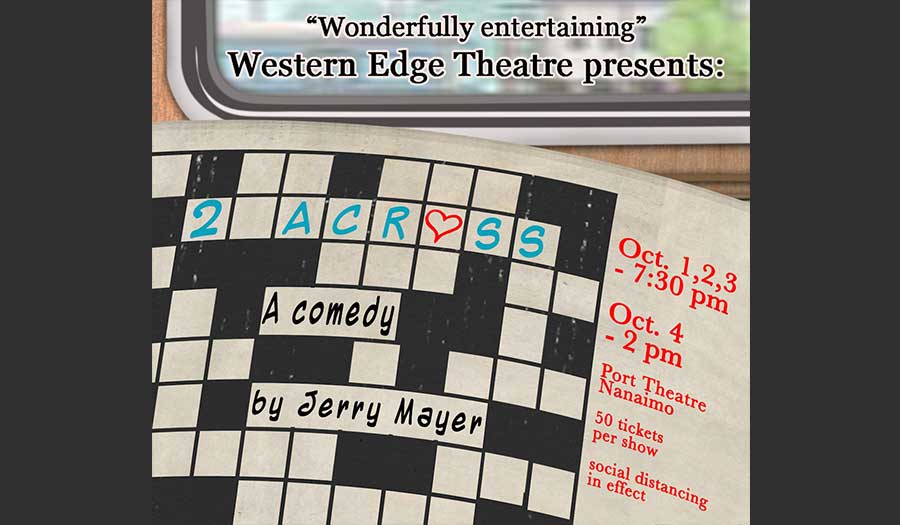 Nanaimo’s Western Edge Theatre moves to the Port Theatre for “2 Across.” a production that’s as socially-distanced as it is funny.

“Western Edge has been looking at ways to produce that follow all health guidelines and use actors in the same bubble,” says artistic director Brian March. “We’ve come up with ‘2 Across’ by Jerry Mayer, a delightful romantic comedy.”

In “2 Across,” two middle aged people, riding a San Francisco Bay-area subway car, work their way through a personal crisis as they both solve the same crossword puzzle. It’s a funny, smart look at how people can sometimes find answers to their own questions by solving the problems of others.

Critics have called “2 Across” a “bright, witty, and poignant play” and “wonderfully entertaining.”

The production features Western Edge artistic director Brian March and well-known local actor Barbara Metcalf, who are domestic partners in real life, and so, like the characters in the subway car, share a “bubble.” Attendance is limited to 50 people per performance, in the 800-seat Port Theatre. Seating will be socially-distanced, with up to six people permitted in a seating bubble. Audience will guided to and from their seats. The play is approximately 80-minutes long, with no intermission, and the concession will not be open. Masks are not mandatory, but are welcome.

“Of course, these are unusual times,” says Western Edge executive director Frank Moher, “but we are looking to maintain a balance that observes provincial safety guidelines while also helping to maintain the psychological health of our community during the pandemic, as we think the arts can do. Particularly this light, charming comedy.”

The Western Edge Theatre production of “2 Across” is sponsored by the Nanaimo News-Bulletin. It is also made possible by financial support from the City of Nanaimo and the Province of British Columbia.