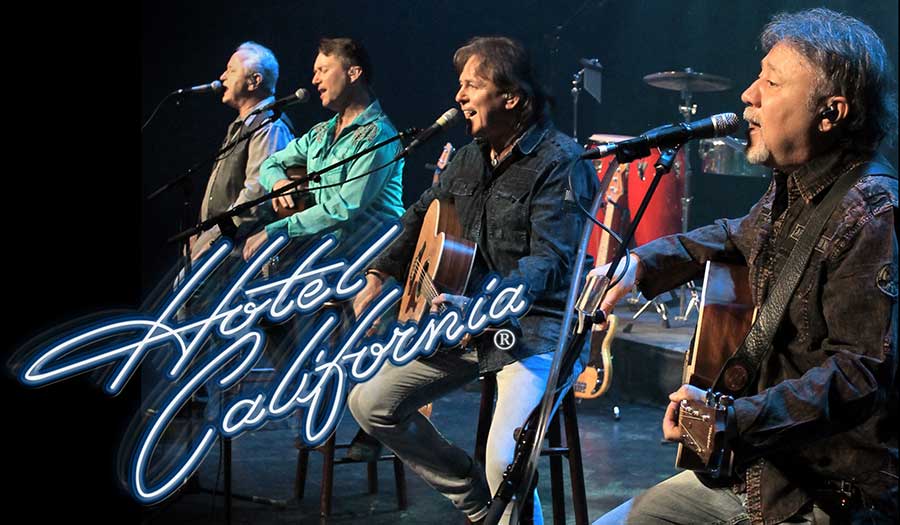 When The Eagles stopped to catch their breath a few decades ago, HOTEL CALIFORNIA began a pioneering journey through their history-making music; a journey that has taken them around the globe thrilling hundreds of thousands of Eagles fans. From the quintessential Eagles anthem Hotel California thru Take It Easy, Lyin’ Eyes, Take It to the Limit, Peaceful Easy Feeling, One of These Nights, Desperado and more, they have been recreating the legendary sound of The Eagles. The band set the bar in 1986, and they’ve remained the industry leading substitute for The Eagles ever since, sharing bills with some of rock’s legends and going places no tribute band has gone before. Their dedication, musical gifts, and obsessive commitment to performing this legendary music authentically, set them apart from the many Eagles bands that came after them.

It won’t take you long to hear why legions of Eagles fans come back to see HOTEL CALIFORNIA time after time and top venues & festivals have them back again and again. The easy-going 70’s So-Cal warmth, incredible vocal similarity, intensely accurate instrumental work and soaring harmonies are the band’s hallmarks. One of the most game-changing song catalogs in the history of rock n’ roll is performed to perfection. If you love The Eagles, then welcome to HOTEL CALIFORNIA – you’ve just found the next-best thing.  For more about HOTEL CALIFORNIA visit: hotelcalifornia.ca