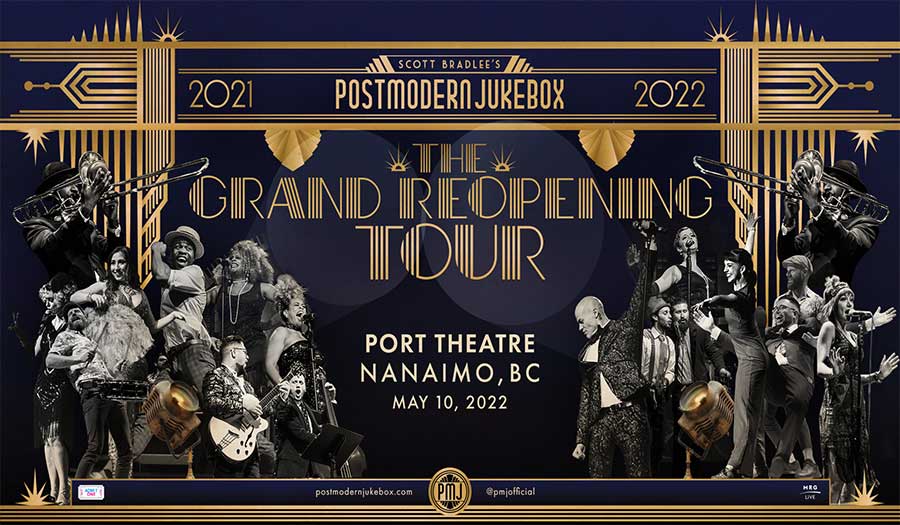 New York City pianist Scott Bradlee created Postmodern Jukebox out of a basement in Queens in 2011, his goal was simple: to remake the pop hits of today into the classic sounds of the legends of yesterday.

Now, nearly a decade later, Postmodern Jukebox has grown to become a pop culture mainstay in its own right, having played over a thousand shows on six continents worldwide — including acclaimed venues like Radio City Music Hall, Sydney Opera House, and Red Rocks Amphitheater. In the process, PMJ has introduced audience to many of the world’s greatest singers, dancers, and instrumentalist — many of whom have gone on to become stars in their own right.

This fall, the wait is finally over and Postmodern Jukebox, the time-twisting musical collective known for putting “pop music in a time machine,” are set to make the ‘20s roar again! Kicking off in September, The Grand Reopening Tour will bring PMJ back to thrill music-starved audiences in the U.S., Canada, U.K., Europe, Australia and New Zealand, performing some of modern music’s biggest hits in the classic styles of bygone eras.

As always with PMJ’s dazzling live shows, The Grand Reopening Tour will feature an ensemble of multi-talented singers and musicians bringing Bradlee’s generation-spanning arrangements alive night after night. The core ensemble is often joined by surprise guests to make each concert unique and unpredictable – making for one of the most thrilling live music experiences of this and any other time period. MusicInsight.com put it quite simply in the Before Times: “Go see Postmodern Jukebox. Stop whatever you’re doing, right now, and go see them!”