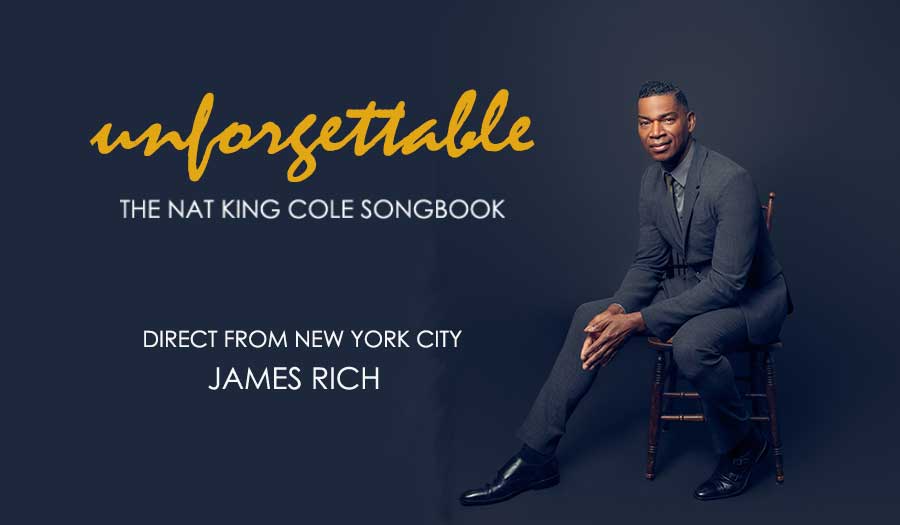 Under the creative direction of the National Stage Company of Canada comes an exciting west coast premiere concert celebrating the iconic NAT KING COLE.
After his highly successful Canadian debut this past December in ‘Home for the Holiday’s – A Nat King Cole Christmas’ here on Vancouver Island, acclaimed New York Actor & Singer JAMES RICH returns to the stage to headline this stirring new production featuring over 2 hours of the legendary Nat King Cole songbook.
With incredible musical direction by Grammy award nominated performing artist and arranger, MATT FALKER from San Diego, California and accompanied by the electrifying talents of MICHAEL ARBOU on drums and CAILUN CAMPBELL on bass, this truly memorable evening of song and storytelling weaves together the journey of this iconic musical figure to international stardom.
Featured musical selections include ‘Nature Boy’, ‘Smile”, ‘I Wish You Love’, ‘Autumn Leaves’, ‘Too Young’, ‘Mona Lisa’, ‘Route 66’, and ‘Unforgettable’, among countless others.
Set against a stunning and elegant background, ‘UNFORGETTABLE – THE NAT KING COLE SONGBOOK’, brings the musical genius of Nat King Cole in a style that defines his timeless legacy. With his rich and velvety voice, natural charm, and dynamic stage presence, JAMES RICH captures not only the tone, feel, style and beauty of the lyrics, but the man behind it.

“James sings like a seasoned pro, like a studio singer, and his emotional range is vast”.
The Beverly Hills Outlook

JAMES RICH BIOGRAPHY
James is a New York-based singer-actor, and playwright. His performing credits include touring with Harry Belafonte (Backup Singer), the First National Tour of “Rent” (Benny), “Saturday Night Fever” on Broadway (Booth Singer), Off-Broadway, and Regional Theater. Additionally, James performed in the premiere production of “Big Band Beat” at Tokyo Disney Resort, for which he was also the vocal and line captain. He received a Mousker Award (an honor usually reserved for company executives) for exemplary team support of the Disney Family.
Additionally, James has been the lead vocalist for numerous bands/orchestras in New York and Los Angeles. His one-man show, “When I Think About Love,” played to sold-out audiences at multiple cabaret and concert venues in the Tri-State area. His LP of the same title is available on iTunes and various music streaming platforms. On-screen, James appeared in national TV commercials, guest star roles on “Everybody Loves Raymond,” “As the World Turns,” and he played Det. Phillip Anderson in the independent feature “Rogues.”
Behind the scenes, James was an Assistant Costume Designer on the Emmy Award-winning Season 2 of “Dancing with the Stars,” and as the Artistic Director for Randall Designs. He was the Costume Designer for “That’s Dancin'” (Crystal Cruises) as well as numerous regional theater productions. He is currently writing and developing “There Was a Boy,” a musical about the life of Nat King Cole. The 2-act story pulls back the curtain on the shy musician’s successes and failures as a performer, a husband, a father, and a son.